May 30 (Maybe) Day 12 – This morning we were supposed to go see the monks collect food on the street in Luang Prabang but my roomie and I woke up and were both stomach sick. Fortunately, we had 2 hours to feel better, but we were still sick all day on the 6 hour bus ride to Vietvienne. Fortunately at the rest stop there was a really nice bathroom that had stalls – one of which was western. The stalls were open on one side overlooking the mountains in the distance. It was private but gave you the illusion of doing your business in public – yet had a beautiful view. 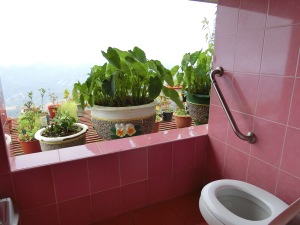 Our hotel room was okay. No major visible bugs, just a few geckos including a dead one being cooked by the sun on our balcony. There were several rat droppings all around the room so again we slept with the lights on. Dinner was at a restaurant down the street but I think I had food poisoning so I only got vegetable soup and then there was a bug in it so I didn’t eat it. I went back to the room and was sick all night. Fortunately, the TV started working but the AC never worked. It was a pretty unpleasant night.

The next day we went to see the elephant cave then tubing into Tham Nam water cave. The elephant cave was very simple but when we were standing there, a dog came running and slipped on the floor and flew right into the back of my legs…..it was pretty funny. 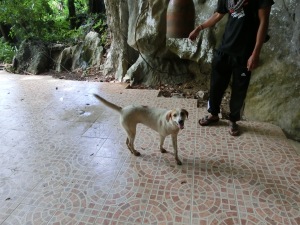 My buddy. I wish I could have saved them all. 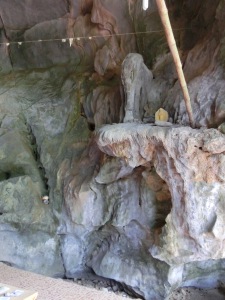 Then he followed us – actually led us to the spot where we were going to tube into the cave. The walk to the tubing spot was pretty long especially since it was all in the blazing sun. The cave itself was pretty neat. The water was cold but refreshing. It was convenient to view the cave from a lying position. There were a lot of interesting formations. The only issue was the guide was going so fast that it was hard to absorb the beauty of the cave. 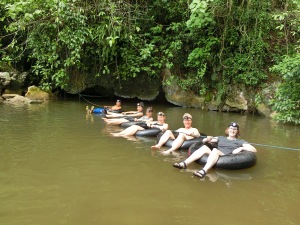 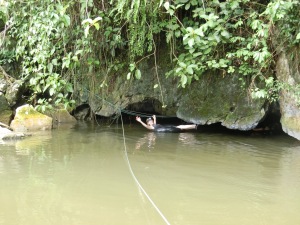 From there, we walked back to the truck and drove to the kayaking spot on the Nam Song River. Supposedly it used to be a big drinking adventure, but I only saw maybe 5 spots along the way and they were all empty – perhaps because it is not high tourist season. 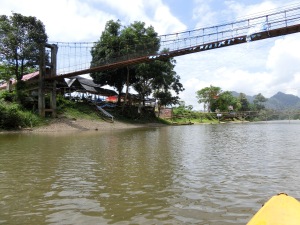 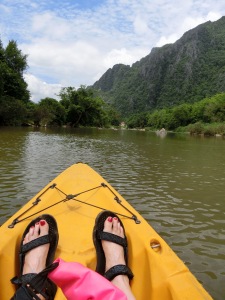 G Adventures has its tours screwed up because in this town there was another good cave and the blue lagoon but there was only time to do one option. They really should figure out how to time things better. We don’t need to drive to the next spot in the middle of the day. Curfew isn’t until midnight in this country, so there’s plenty of time to drive off-hours. There also isn’t enough time after tubing to grab a proper lunch before you have to head off to the next city. Random but in the drive to the next spot, there were several trucks full of army men. I wonder who Laos is planning on getting attacked by.

I also started sharing my money with my roomie and ran out so I had no money for food. I kept reminding the CEO that we need to stop for an exchange but he told me we stopped at an ATM last night. I tried to explain that it is not the same thing and the ATM wasn’t even working but he liked to ignore me. At this point in the trip I figured I would cut his tip in half. At the beginning of the trip, I thought I would give him a huge tip but my liking of him dwindled every day.

On this day we had a crazy driver who drove really fast and hit all the bumps so we literally flew off the seat. By this time, I only had two days left on this trip but felt the end couldn’t come soon enough.

On Friday night upon arrival to the hotel, we showered and got ready for dinner. We went to another charity spot where the food was okay, but the prices were high. It was our last dinner with the Italians. I thought that perhaps we would stay out late or drink or have a toast or something but there was nothing. After dinner most of the group wanted to go for a walk – a walk to nowhere. Roomie and I declined and they had us walk back to the hotel ourselves even though we weren’t sure where it was. We went the right way but weren’t sure, so we had to ask directions. Luckily we were right down the block from the hotel. The night consisted of rat shit on roomie’s headboard, and she thought someone was breaking into the room so she woke me up for that as well.

Flying back early was a bit consideration at this point, but it was just another couple of days so I toughed it out.