In the morning we had breakfast then took a medium tuk tuk to a temple of course, an Arc de Triumphe look alike and the COPE museum which is an agency that helps kids with disabilities like club foot. There were a few of these kids there and it made the experience uncomfortable – I’m not sure why. They also showed us an hour long documentary on the leftover bombs from the Vietnam War and how an Australian man was training the Lao people to deactivate the bombs and bombies (little bombs). It was really terrible to see how my country had ruined these lands for decades. People are still dying because of the war and the US is doing nothing to help. They haven’t even signed an agreement like other countries to help get rid of the bombs. I really should research and read to learn more about these things. Traveling makes me realize how uneducated I am about life and history.

After all that we went back to the room for 45 minutes and then had to say good-bye to the Italians and travel on the bus for 45 minutes to the train. We had to pay 10,000 kip to leave the country. We walked through a checkpoint to be in limbo between Thailand and Laos and then took a free transfer bus to the overnight train station where we waited another hour. 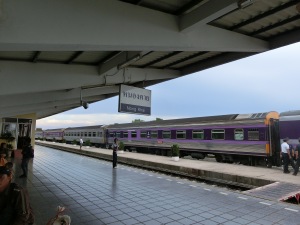 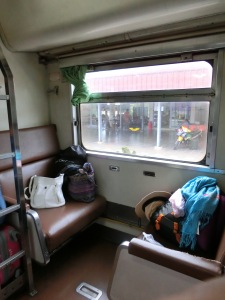 We finally boarded the train and it was worse than I imagined (I had pictured private rooms like I had in Egypt). It only had a curtain for privacy and the bed was very tight. In general the bed was comfy but it was so noisy from people snoring and walking that it was hard to sleep. (Yes, I realize to other travelers I sound like a whiny brat, but by this point of the trip, I was so hot and tired and fed up with everything that everything felt like torture.) Roomie and I watched part of a movie but were falling asleep. I spent another 2 hours in the middle of the night watching another movie. We got woken up early with people mulling around and the crew putting the beds back into chair formation.

From there we walked underground to the street the Centra Hotel was on. We dumped our bags off then most people went to a restaurant for breakfast but a few of us went downstairs to the grocery store to eat instead. Nothing looked appealing to me but I settled on Frosted Flakes and milk. It was good enough. Roomie and I spent most of the day sitting, reading and chatting. I wanted to go to a place where you could pet lions but she didn’t want to spend the money and I didn’t want to go by myself. (Yes, I know they are drugged and probably tortured……I am a terrible person and wanted to do it anyway.) We tried to find a spot for lunch but it was too hot so we went back to the grocery store where I had a sandwich. The tour operator loaned us his room to shower which was nice. We had ice cream on the roof deck then said bye and took a taxi to the airport. We checked all of us in then went to my gate. Took a selfie then said bye and kept waving until we couldn’t see each other anymore…. was a nice time.

The first leg of the flight was good. Had an empty seat next to me. Started to feel stomach sick during the flight so couldn’t really eat. Got off the plane and had to go through security again. The Abu Dhabi airport was really odd. It’s shaped like a circle and there aren’t many places to sit – just lots of places to eat and shop. Then all the terminals are offshoots and the bathrooms are blocked off to passengers only. It’s very strange and inconvenient. I went through security again and then was blocked from the bathroom area again – not fun! Luckily my belly behaved itself. Got on the second leg of the full flight. Couldn’t eat most of the dinner because it made me nauseous. Watched lots of movies and slept some.

Overall, I think I had a negative experience because I did not research this trip at all prior to booking it. I booked it solely on the facts that it was somewhere I had never been before and the tour matched up with the dates that I wanted to travel. It was also the hottest it had been in that part of the world in a long time – even the tour guides were sweating.

Had I planned better – packed different/more snacks, somehow been prepared for that unbearable heat (I think a different kind of sunscreen would have helped), massive bugs and rats, perhaps I would have had a different experience. Because I have been on tour that maximized time better and were more forthcoming in what you were doing and when, this experience was knocked down a few stars right off the bat.