On a warmish day in November, I decided to take advantage of the weather and go hiking.  I wanted an easy and short hike without a blue trail since I always seem to get lost on blue trails (only semi-joking!). On this website I found that I can easily search for hikes not listed in any of the books I have. I found a few options that sounded good but were longer than I wanted to do that day. This particular hike was under 3 miles and rated easy. SOLD!

The directions by Daniel Chazin are great. I put the GPS coordinates in my phone’s mapping program, and it led me right to the parking lot. Finding the trailhead was also easy.

In November this trail was not very interesting, but I am guessing that it looks beautiful in the Spring, Summer and Autumn. 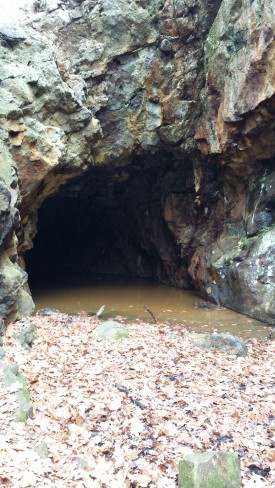 Entrance to the mine.

Trail markers are often and obvious. I only got lost once and it was my own fault.  After the lake on the yellow trail, I insisted on going left onto the white Nurian trail even though the directions clearly state to go right.

By going left I ended up going downhill over many rocks and even had to do a semi-scramble down some of them. I said to myself “this cannot be an ‘easy’ trail” but instead of turning back I kept going to see if it would intersect with another trail. Finally when the trail kept being too difficult for my little girl Chihuahua who I was carrying at that point, I turned around. I had to put her in her pouch in order to be able to climb up the rocks. Going uphill was quite difficult.

In the Valley of Boulders. I didn’t take pictures of the rock scrambles or steer ascents/descents because I was stressed 😦

It seems I had entered the Valley of Boulders. From the description, it’s really good that I turned around as there was a more difficult rock scramble ahead.

Once I reached the yellow trail again, I easily found my mistake and was able to take the correct route back to the car.

Green Pond. I should have gotten closer to take a better look, but this is where I ran into the most people as several trails intersect here.

This hike contained the most hikers I have ever encountered on any trail. It probably didn’t help that it was Veterans’ Day. The hikers were very diverse – rock climbers, single male hiker, older group hikers, Asian tour bus hikers, and two guys just wandering the trails to eventually settle in and sleep for the night. I know that doesn’t sound like a lot of people, but I’m used to complete solitude when I’m hiking since I go mid-week.

Anyway, I thought the trail was worth the time but would probably not do that particular loop again.

I did feel accomplished though, because I did learn that the marks on the trees can be distinguished from one another not only by color but by direction and shape (horizontal vs vertical / bar vs blaze vs diamond etc.). So overall, great day…….minus all the ticks I had to take off my dogs.