Turning your dog into a taco is easier than you think. There are several steps, but it can come together pretty quickly if you have basic sewing machine skills.

I started off by measuring the length of my dog from neck to tail,  belly to back and across his back the wide way (straight lines).

Next use an appropriate-sized bowl to trace a half circle onto the yellow felt. Cut it out and then make sure the sizing is right for your dog by holding it against his body. If all is good, cut out a second piece.

Next use your measurements of your dog’s back length and width to create a template for the “meat”. I made mine a bit wavy so that it wouldn’t look like a brown brick. 🙂  Once you have the template done, hold it against your dog to ensure it is the right size. Using the template, cut out two pieces of brown fabric and sew them right sides together leaving a small opening to flip it right-side out and also to stuff it with the filling. 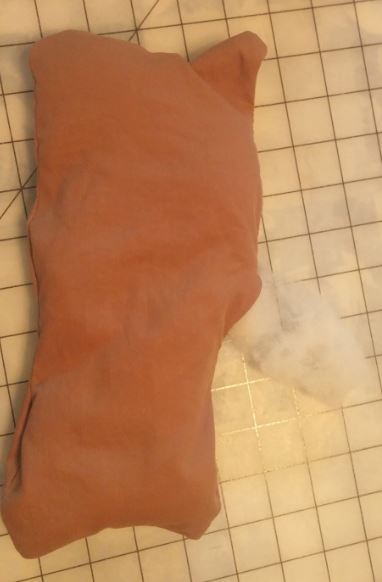 Once the meat is filled with stuffing, go ahead and hand-sew it closed as well.

To make the lettuce, cut out a strip of green fabric twice the length of your taco. Ruffle pin the fabric to the inside top of the taco and sew it on using a simple straight stitch. Be sure to use a yellow thread so that it isn’t visible on the outside of the taco.

Ignore the messed up stitching. I redid it after I took the photo 🙂

You should now hand stitch the meat onto the inside of the taco shell right by the bottom of the lettuce.

The next part is your preference. I was feeling lazy and didn’t want to make straps and velcro to secure it to my dogs so I just sewed on some elastic under his chin, front legs and back legs. Alternatively, you could sew on two pieces of fabric with velcro in each area and secure it that way. Totally your preference.

You’re almost done! Now all you have to do is cut up some felt pieces for the filling. You could use yellow and orange for cheese, red for tomatoes, etc. You then just hot glue these pieces to the top of the meat.

Viola! Your dog is now a taco. Don’t let him too close to the cat……he may get eaten!

PS Later I added a whole and a harness clip extension to the middle of the costume so that I could walk the dogs on leash.

PPS I paired this with a margarita costume for myself. Tutorial to follow!

If you have a Chihuahua, you need to belong to Chihuahua Nation – a worldwide group of people and their Chihuahuas. We get together to socialize our pups, have some laughs, learn from each other and help rescue Chihuahuas in need.

This month’s event was for St. Patrick’s Day. Hosted by Ada Nieves, this pawty was a sea of Chihuahuas and their pawrents dressed in green.

I made my pups their outfits. Eli was especially tolerant of his headpiece. 🙂

It was a fun day with good food and great people! Come join the fun!

Two years ago this month, I became mom to an interesting couple of animals – Mimi the dog and Milo the cat. However, their story started 5 months before I even came into the picture. You see, I belong to a Chihuahua meetup group that also assists in rescuing Chihuahuas in need. A Facebook post by Ada Nieves about a Chihuahua and kitten that needed a home caught my eye. My family already consisted of two 12 year old cats – one with chronic sinusitis and the other an anti-social 22 pounder, a 5 year old Chihuahua and an 18 year old turtle. Most people would think my house was full, but I knew there was a piece missing. I debated on adopting a playmate for the dog or a social cat for my lonely cat but was having trouble deciding. When I read Ada’s post, I thought that it may be the answer to my problem. I could help keep the pair together and finally stop worrying about making the wrong choice.

The story of why Mimi and Milo needed to stay together is more than just animals getting along. Mimi had become a surrogate mother for Milo (then named Rover). I will start from the beginning…..

In the Spring of 2012, a lady named Jen took in two little furbabies as she is known to do; however, this time she didn’t realize what an adventure she was setting out on. Mimi was taken in by Jen and her husband after her original mom became critically ill while Mimi was pregnant and was no longer able to care for her. She had a c-section because she only had one puppy in the womb, and unfortunately her puppy was not born alive. The week before they brought Mimi home, Rover was brought into her sister’s grooming salon by a man who said his Mastiffs brought him the kitten! Rover barely had his eyes open, so they hand-fed him until the next week when Mimi arrived. Mimi seemed very depressed, so they offered her the tiny kitten. It was instant love – proven when she started to nurse him. Rover played so gently with her and their bond was amazing…they truly loved each other. It was then that Jen knew that this pair could never be separated. She set on a quest to find them a furever home. Through Ada, she searched high and low to find them the perfect placement.

First pic of Mimi and Milo together 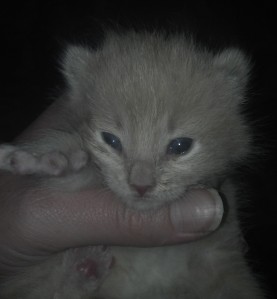 However, Mimi’s troubles were far from over. Later during her spay surgery in August, she developed a hernia along her spay incision, so yet another surgery was required. She actually developed an additional hernia right after I adopted her and needed another surgery then as well – that’s 3 surgeries in one month if you’re counting!

Anyway, while Mimi healed from the first hernia surgery, Jen and I had many conversations to make sure my home was the right one for Mimi and Rover. Fortunately for me, she thought we would fit well together, and I was able to complete my furry family! We each drove many hours to meet halfway between our homes and ended up meeting in a McDonald’s parking lot! Yup… I’m lovin’ it!

When I finally arrived back home, I was worried about how they would adapt to their new surroundings and siblings and vice versa but everyone tolerated each other well right from the start. I could tell that Mimi and Milo (Rover was a good name for the tough guy at the beginning but now he was a mush and needed a mushy name like Milo!) were completely bonded and inseparable. They would sleep in the same bed and many nights I was woken up by the sounds of Milo still nursing on Mimi – 5 months later!

It’s two years later, and their bond is as strong as ever. Milo is now twice as big as Mimi, but he plays with her like they are the same size. Mimi and Milo have completely settled into their new digs. Milo has taken his place as the bratty little brother and chases around the older cats, and Mimi has taught her Chihuahua brother how to be a nicer guy.  In Jen’s words: Milo is like the perfect mix of cat and dog, and Mimi is just a ray of sunshine.

Mimi is now a therapy dog bringing smiles to residents of physical rehabilitation centers, and Milo helps raise money for animal charities by starring in the annual cat fashion show at the Algonquin Hotel in New York City.

They love to cuddle and sleep near each other. 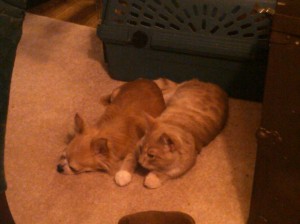 I love this pic of them sleeping with Milo’s feet on Mimi’s face! 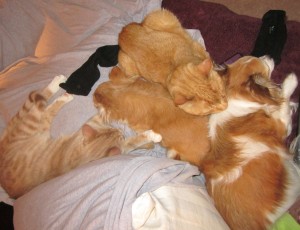 Lately I have been obsessed with kale. I saw it prepared once on The Chew and decided to try to duplicate the recipe at home. Unfortunately, my plan was ruined when I couldn’t figure out which was the kale at the supermarket. All the greens look really similar and they are all bunched up together. Pathmark’s labeling system left a lot to be desired, so I just chose one and went to check out. Fortunately, the cashier asked what I was buying and when I said “kale” she said, and I quote “This ain’t no kale”.  So there went that idea.

Fast forward a few months and my sister starts making kale chips – turns out they are a big thing these days. I finally decided to try it on my own and here’s how it went.

First of all, I went to A&P this time and it turns out they have their greens labeled on their rubber bands which meant I was definitely buying kale! I felt so accomplished! I took that huge batch of kale home, took off the stems, washed the leaves, dried them by squishing them in between a few papers towels (twice and will be reused to clean up pet messes later), and ripped them into pieces (not too small since they will shrink during baking). 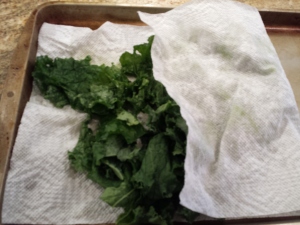 Next I drizzled some extra virgin olive oil, regular salt and pepper on them. I sprinkled Adobo on a few pieces to see how they would taste as well. I have a heavy hand, so I’m sure I used way more of everything than a normal person would or should! I threw them in the oven for about 18 minutes at 325 degrees. This is how they ended up turning out. The whole tray was full at the beginning so you can see how much they shrink during cooking. Keep an eye on them after the 15 minute mark because they can go from crispy to torched in a very short amount of time. 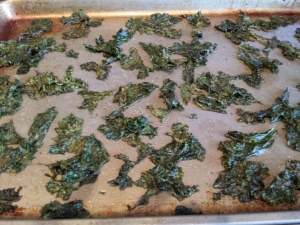 I definitely learned to lighten up on the salt. My chips were very tasty but also very salty. Adobo gave them a little extra kick which was nice.

Another tip: after I wrote this post I wanted more chips another day, but not as many, so I cooked them in the toaster oven. I put aluminum foil on the tray for easy clean up. The chips came out really well. For the summer especially this would be a great way to cook up some chips without heating your whole kitchen!