October is one of my favorite months of the year. It is Autumn, hiking trails are beautiful AND it has Halloween….cough cough…. I mean HOWLOWEEN!

Yes, that’s right. I said Howloween. The time of year when it’s perfectly acceptable to dress your dogs up however you like. This year I had two dog-centered events to attend, so I wanted to have some really fun costumes. Mimi played the role of a Chia Pet and Eli was very fittingly Oscar the Grouch.

I started my quest to create their costumes last year. I found a cheap small plastic garbage can in Target and spray painted it silver. I stored that thing for a whole year! On Friday, I dyed Eli’s fur green by using regular green food coloring and water. As you can see, the green didn’t really show that well, even on his white fur. I dyed him three times using a spray bottle, dousing him in cups of green water, and submerging his paws and tail in a big cup of green water. The water was really green, but perhaps his fur is not an ideal texture for absorbing dye. Good thing he doesn’t have to worry about dyeing his grays anytime soon! 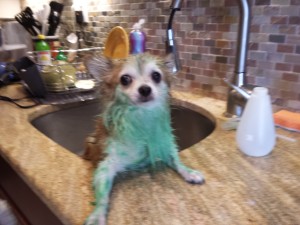 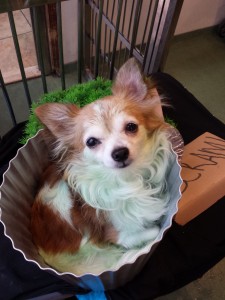 Earlier in the week, I drilled two holes in the bottom of the can – one to connect it to the wood platform that sits on top of their carriage (screw and nut) and one to feed a rope with a carabiner on it to connect to his harness to ensure he wouldn’t jump out (and so that no one could snatch him if I looked away for a moment). I did leave enough slack to allow him to stand up fully and adjust himself however he wanted. Interestingly, he never did try to get out of the can.

I placed a really comfy blanket in the garbage can so that he would have a soft place to sit and he enjoyed it so much that when he got tired, he

just curled up and went to sleep in the can which made it look like the can was closed!

For Mimi’s Chia Pet costume, I purchased a remnant of brown/taupe felt-like material for the body and cut out two pieces from a blanket-coat pattern I previously made for her. I ended up chopping off the neck piece of one of the pieces in order to use it solely as a top piece to attach the “chia” leaves to. I used these two items (lawn grass and more grass) and combined them using hot glue and sewed their edges to the top layer of the outfit. To ensure Mimi stayed comfy, I placed a layer of batting in between the two layers and then sewed them together.

I’ve only had my sewing machine for a few weeks and can barely sew a straight line, but I was determined to sew legs onto Mimi’s outfit. I just held the base on her and marked kind of where I thought legs should be. It worked well enough, but next time I’ll try to do it properly so that she can’t pull her legs out accidentally. 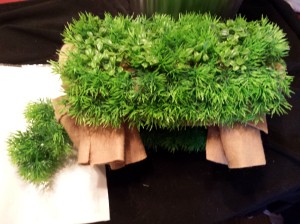 I also added extra pieces to the neckline afterwards by creating a grass necklace that I sewed only on the end pieces and a quick stitch in the middle so she would have freedom to move it out of the way if she laid down.

I tied the theme of the two costumes together by dressing as an 80s chick with the multi-colored outfit, blue eyeshadow and a big bow on my head. Together we were Childhood Rewind! 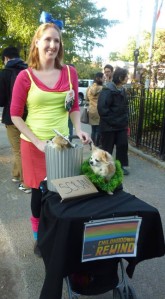 We had a great day at Tompkins Square Park in New York City and even managed to win third place the next day at the Chilloween pawty.

Have I mentioned how much I love October??? 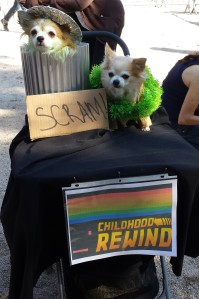 Being adorable is tough work – nap when you can!