We had breakfast then hopped on a bus to the elephant sanctuary where we rode elephants (in a chair on their back – two people per elephant). It was pretty fun. Even on the head, you never really felt like you’d fall off. Before riding them, we fed them which was cool because they were right next to you eating. After the initial ride, we were able to ride them on their head into the Mekong River to scrub them clean with a scrub brush. It was cool, but you got covered in poo because when an elephant’s gotta go, he’s got to go! 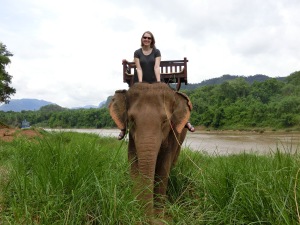 We were able to rinse off and change then we drove to a dock where we took a boat across the river to the Pak Ou Buddha Caves (Tham Ting and Tham Phoum) which as you would guess, had lots  of buddhas. The caves were okay – nothing spectacular. 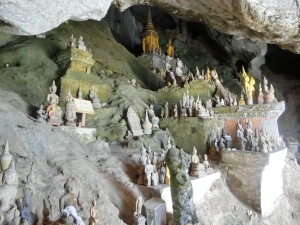 From there we took the boat to a Ban Xang Hai (Whiskey Village) where they make wine and spirits. It was basically a tourist trap, and they sold jars of liquor with all kinds of insects and animals in them – even a bear cub. It was really horrible. Bears are endangered in Asia, and they kill them for profits. Complete monsters! At first I was going to purchase a scorpion liquor but decided I didn’t want to contribute to people with that mentality. (Yes, I realize it’s their culture and heritage, but I don’t have to like it or agree with it.)

After that we took the boat back downstream to a spot closer to the hotel where the bus picked us up. Roomie and I showered then went to the night market again and bought some stuff. Then we joined the group at Lao Lao restaurant which had a really nice atmosphere with plants and jungle-like things. The only problem was that it was very dark, and we got a hot pot where you cook your own food on the table, so we couldn’t really see what we were doing. There were also a lot of bugs. For dessert we went back to the market and got 2 crepes to take back to the room and made tea. 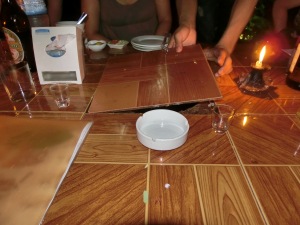