Any holiday that includes BBQ and drinking is a great day for me. Throw in fireworks and you’ve got yourself a party! So when my friend decided to host a potluck Independence Day Party, I was beyond excited. What would I make? Should I try to be creative? Sure! Why not!

Well……I should have realized that I am not that creative, but alas I have the Internet so I hunted. I was very happy to find this post  that shows not only how to make stained glass jello but points out that you can do it in patriotic colors!

I should have known that it wouldn’t be as easy as it looked. I went and bought the ingredients; I made the jellos (in four 8 inch square pans because that’s all I had); I waited for them to chill.  Tick tock! 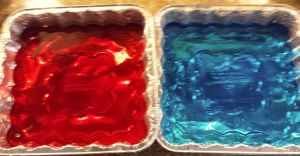 After 4 hours had passed, I realized I should start on the second half of the process. I made the gelatin mix (had to look up what jello blooming meant) and waited for it to chill. It didn’t say how long to wait to chill so I put it in the fridge……and promptly forgot about it. An hour later I remembered and had to smash up the now super chilled gelatin.

I attempted to cut my colored jello into shapes but it just became mushy slops. I put the kind of sort of cut jello in the larger pan and made sure the red and blue were spread around. 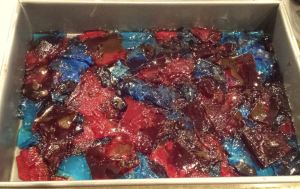 I added the gelatin mixture to the top and tossed it back in the fridge overnight. (Imagine the picture above with white goo on top.)

In the morning, I pulled out the pan and finger tested it – it bounced back! Yay jello! However, I decided to turn it over onto a sheet pan to more easily cut out the shapes and heard that liquid sound – glub glub. Uh oh! I released the pan and out came my jello goop! My red, white and blue jello goop.

I attempted to cut a shape out of it, but it just oozed out of the cutter. It still tasted okay, so I improvised and dumped the concoction into a clear bowl and stuck some flag toothpicks in.

Voila! That’s what I meant to do all along! 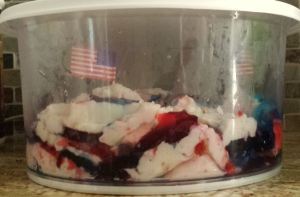