On Wednesday night, my cat, Milo, and I were a part of a cat fashion show at the Algonquin Hotel in New York City. The show was a part of

a fundraiser for one of our local animal shelters, Bideawee. Before the show, Bideawee had a truck parked outside the hotel with adoptable kitties. Remember, don’t shop, ADOPT!

The show featured clothing designed and created by the wonderful and talented Ada Nieves.  The collection was named “The Algonquin Copy Cats Round Table” in honor of the original members of The Algonquin Round Table. The human group consisted of New York City writers, critics and actors who met for lunch every day at the hotel  over 80 years ago. Clothing design was “inspired by some of the most prolific authors and writers of the century.”

A quick list of some of the featured cats and their couture:

Ferrara strutted her stuff in a dress inspired by the story “The Sly Old Cat”, a book by Beatrix Potter. She even had a teacup and saucer for a prop!

R2D2 wore an outfit inspired by the novel “The Black Cat” by Edgar Allan Poe.

Daisy appeared in a dress inspired by the book “The Cat Who Came For Christmas” by Cleveland Amory.

Q held his own in an outfit inspired by a Sea Captain friend of Ernest Hemingway.

And my Milo wore a shirt that featured the Jellicle Cats who were a part of the musical CATS which was developed from T.S. Eliot’s “Old Possums Book of Practical Cats”.

Unfortunately, because of health regulations, the cat show was forced to be upstairs away from the party which was not ideal. The room was small and warm and always too crowded. I hope in the future, they are able to find a better solution. They also should have had the cats catwalk like a real fashion show. Just having people stand around with 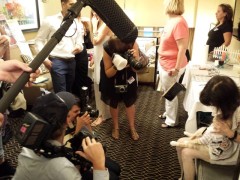 their cats isn’t really too fun. My cat was the worst model. For the most part he wouldn’t sit still and kept trying to hide. I blame myself since I didn’t really practice with him. I didn’t foresee the actual paparazzi there who would have huge cameras flashing up close in his face. I also didn’t think that being dressed as a cat myself would get my picture on the internet. I was just trying to be fun and play the role of Mr. Mistoffelees from CATS.

Overall, the night was a success. I believe tickets sold out and a lot of people participated in the raffle. I did think the participation in the raffle was a bit low but the way they set up the purchasing of the tickets was a bit odd, so hopefully they will change that in the future.

Oh and I did get to meet the Algonquin Hotel resident cat, Matilda. She’s a bitch and I love her!